We perceive “white” when all visible wavelengths are combined in roughly equal amounts. However, all colors of the visual spectrum, including white, can be created by mixing red, blue and green (RGB) colored lights in the correct proportion. Two light sources can vary greatly in their “color mixture” but still be identified by a viewer as the same color.

Differences in the color of a light source can have a pronounced effect on an object’s “color”. A common experience is thinking you lost your car when parked in a lot illuminated with high pressure sodium lamps because of the profound color shift. Task visibility is aided by both “luminance,” the amount of light that is reflected from an object, and “illuminance,” the amount of light striking an object. This article addresses artificial illuminance provided by fluorescent lamps (i.e., light bulbs) in industrial environments. Four factors are critical for ensuring optimal artificial lighting: the amount of illumination required, and the color temperature, color rendering index (CRI), and the Spectral Power Distribution (SPD) of the lamp.

Too much light can make assembly and inspection tasks more difficult by creating shadows and causing visual discomfort for the user. Excessively bright light can also wash out visual gradient, like making a thread undetectable against a matching piece of fabric. Too little light, on the other hand, can contribute to longer task time and increased errors.

A number of factors influence how much total illuminance is recommended:The amount of artificial task light necessary also depends on overhead and natural ambient light. Keep in mind that the amount of artificial overhead and natural light reaching a workstation can vary significantly from station to station because of the relative location of the station to the light source, obstructions, time of day, and so on. 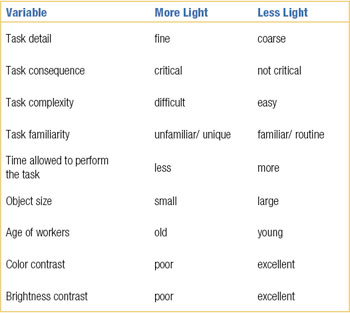 The Illuminating Engineering Society of North America (IES) provides recommended illumination levels for indoor and outdoor applications in Industrial Lighting (ANSI/IES RP-7-1991). Nine categories of work activities are defined, coded “A” through “I.” At the low end, Category A (illumination for public spaces with dark surroundings), a range of two, three or five foot-candles (20-30-50 lux) is recommended. Category I, the upper end, for very special visual tasks of extremely low contrast and small size, specifies illuminace levels of 1,000-1,500-2,000 foot-candles (10,000-15,000-20,000 lux). A foot-candle is the English term and lux is the metric term. Lux values are estimated to be approximately 10x the foot-candle values. The exact conversion between the foot-candles and lux values is 1 fc = 10.76 lx.

The range of values for each category is based on a weighting scheme described by the IES. For categories D through I, the weighted characteristics are:

In general terms, more light is recommended with increased age, greater task speed and accuracy, and less task reflectance. If you are working in a country other than the United States, you should investigate its regional standards for light levels.

Illuminance is measured on the horizontal work-plane and is easy to measure using a basic pocket-sized light meter. Position the meters’ sensor at the specific location where you want to measure illumination. The light (artificial and natural) striking the sensor is quickly measured and reported in foot-candles or lux.

There are a number of variables that can influence the meter reading, with the most important being the distance from the light sources and any obstruction interfering with light reaching the sensor. Less obvious variables are the length of time a fluorescent lamp has been on and the age of he lamp. (see Electric and Photometric Msrm of Fluorescent Lamps, IES LM-9-88, for fine details.) 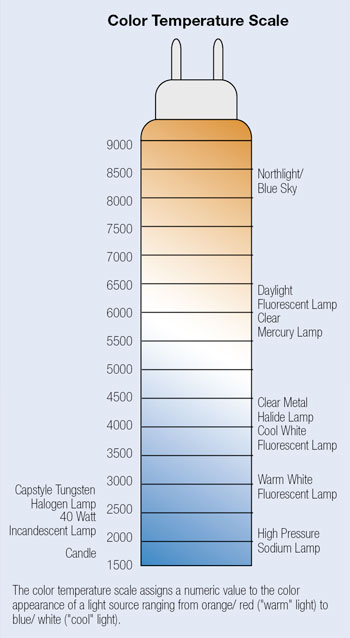 In a two lamp fixture, install a “cool white” lamp next to a “warm white” lamp and notice the obvious difference in color. One has a pink tone and the other a blue tone. According to Color and Illumination (IES DG-1-1990), the numerical assessment of a lamp’s color is based on a comparative color of a unique series of light sources characteristic of incandescent glowing bodies, like the sun, known as blackbodies. At lower Kelvin temperatures, the color is a red similar to that of an electric stove-top heating element. As the temperature increases, the material appears yellowish-white followed by a transition to a bluish-white.

Color temperatures up to 3000 K are referred to as “warm” and make red and yellow objects appear more vibrant. “Moderate” temperatures between 3000 K and 4000 K enhance most colors equally. “Cool” temperatures are above 4000 K and enhance greens and blues.

Cool lamps are typically used in industrial environments. Lamp temperature is usually identified on the lamp and included in the manufacturer’s part number by a simple reference (e.g. “cool white” or “CW” or by a specific number, such as 3500 K or 35).

Although lamps from the different color temperature ranges have an impact on the perceived color of the items they strike, the color temperature values should not be used to predict how closely and object will reflect the same color under the artificial lighting compared to under natural daylight lighting. Instead, two other lamp characteristics need to be determined: their Color Rendering Index (CRI) and their Spectral Power Distribution (SPD). The CRI is probably the more important of the two and is usually easily identified via the part description for the lamp.

Natural daylight is the reference standard for all high color temperature and high color rendering index (CRI) lamps. Each phase of daylight has an associated Kelvin temperature. Light from a yellow sunset may be about 2,000 K, sunlight, about 5000 K, and the light from a blue sky about 100,000 K.

The CRI of a lamp, reported by the manufacturer, is determined by individually illuminating eight standard colors by the lamp being tested and again by the light from a blackbody (e.g. the sun) matched to the color temperature of the lamp being tested. If the test color appears the same under each condition, the maximum rating possible of 100 is assigned. The greater the color shift, the lower the rating. All eight standard colors are tested in this manner, and the average of the eight test results is recorded as the CRI rating for the lamp.

The CRI of a lamp can typically be determined by inspecting the literature from the manufacturer or contacting the manufacturer directly. The CRI for lamps with common names (e.g. “warm” or a “cool” white lamps) made by different manufacturers may vary. CRI ratings of 80 and above are considered high and indicate that the source has good color properties. It is important to note, however, that a high CRI will not necessarily reproduce every color equally well because the CRI rating is an average of eight different color tests.

When color rendering is inaccurate or inconsistent, certain tasks can become more difficult, such as when fast and accurate assembly requires color discrimination (e.g., wires or symbols) or for quality inspection or a paint job, or when exposed color is used to flag missing parts. Problems can include inconsistent decisions made by inspectors when different lamps are used at different workstations, or slower or incorrect employee performance because of an inappropriate lamp used throughout.

If you are particularly concerned about the visual appearance of a specific color, you also want to know about the SPD.

The SPD curve shows the precise color output of a given light source by charting the level of energy present at each wavelength across the visual spectrum. Any specific color can be created using an infinite number of different color combinations, but each of their SPD’s would be different. If the two SPD’s differ in the amount of purple and the user is inspecting an item that is judged to be purple under natural lighting, the item may not appear the same color even viewed under lamps with the same CRI and kelvin temperature but with a different SPD in the purple range.

Predicting perceived color based on the SPD of a light source is extremely difficult due to the complexity of light (not to mention individual differences). However, if you know that color matching, comparing, or inspecting is a critical task for your manufacturing process, it is important to know that choosing a lamp with the appropriate color temperature and high CRI may still not define the best lighting solution for your application. Consultation with a lighting expert from one of the major lamp manufacturers will probably be time and money well spent to help choose the lamp with the optimum SPD for your application. 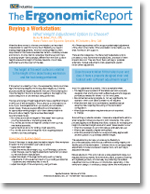 Visit the Ergo Articles Library
Case studies and articles to improve the health of your employees and your bottom line!