SES supplies a single 15 amp electrical circuit in the uprights of a single – or – double-sided workstation. SES is pre-wired at the factory to eliminate the time and cost of on-site hard wiring.

The advantage of SES is that the workstation is pre-wired with duplex receptacles in the uprights for ease of access. 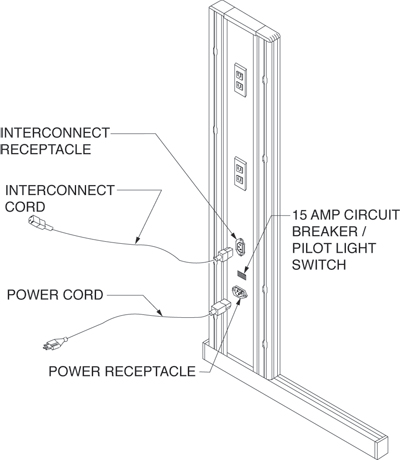 For add-on uprights of 60", 72" and 84", there are four duplexes (two on each side of the upright in the metal trim panels) providing a total of eight 15 amp receptacle outlets. When an add-on unit is installed, this is used as the middle upright. The uprights from the starter unit are moved to the outside positions of the in-line configuration. Note: Outside upright trim panels have no receptacles and are laminate, not metal. SES receptacles protrude slightly, which must be taken into consideration when planning accessory addition placement.

* When ordering adjustable height options on SES workstations, the starting height of the worksurface cannot exceed 30" from the floor.

Power cords: The power cord is first plugged into the upright, then into the power source. No wiring is required. Power cords are included with starter and add-on SES benches.

Assembly is a 4-step process:

Warning: All units should be disconnected from the power source before interconnecting or reconfiguring.